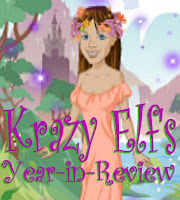 Wow, it's the end of the year already! Though I just started this blog I figured I'd do a "Year-in-Review" type thing anyway. And since techniclly I've only read 3 (maybe 4) books that were released in 2011 my lists will be made up of books I've read for the first time this year. I actually read 37 books this year which for me is fairly awesome. I can't remember the last time I read that many books but I know it was before I started college... that was way to long ago. But now I'm back and there's totally awesome books out which makes it easier. My goal is to give regular reviews and meet great friends on here! Hope you all have a Magnificent 2012! Happy New Year from the Krazy Elf!!!
Top 5 Favorite Reads of 2011

1. Hunger Games Trilogy by Suzanne Collins
I kept hearing about this series and figured “Ok, so I’ll read it”… it blew me out of the water. Great characters, great action, great writing, simply GREAT!!! Suzanne Collins is a genius. This is one of the few books I actually bought new from a store.

2. Blood Red Road by Moira Young
I saw this at Wal*Mart when it first came out and even though it was written in a heavy accent and had no quotation marks I thought I’d give it a shot and asked the library to buy it. It shocked me almost as much as HG did at how incredibly awesome it was. I love the bickering between Saba and Jack, I love the action, and I love how Saba’s not a saint but loyal in the end. I was lucky enough to get this for Christmas (Thanks mom and dad!)

3. The Moonstone by Wilkie Collins
Even though it’s a classic this book was a page turner (especially towards the end) it was hard to put down. And the narration is simply MAGNIFICENT!!! This book keeps you guessing til the very end!

4. One for the Money by Janet Evanovich
See my review here.

5. Sweetly by Jackson Pearce
Though not as much action as “Sisters Red”, I loved the simple pace and sweetness of the book. I loved watching Gretchen learn how to use a gun and the relationship between her and Samuel. Really cute book.
Honorable Mention: A Christmas Carol by Charles Dickens
First book I read this year and also my first Dickens book. It was for a Victorian Lit. class and even though I knew the story from all the movies and cartoons I was still greatly surprised. Even though it was a somewhat dark story I found a lot of humor in Dickens’ writing as well as a lot of power. Even if you think you know the story read this book, it’s simply beautiful.
Top 5 Favorite Female Characters
1. Katniss (Hunger Games)
2. Stephanie Plum (One for the Money)
3. Saba (Blood Red Road)
4. Tessa (Clockwork Angel)
5. Gretchen (Sweetly)
Top 5 Favorite Male Characters
1. Jack (Blood Red Road)
2. Joe Morilli (One for the Money)
3. Samuel Reynolds (Sweetly)
4. Gabriel Betteredge (The Moonstone)
5.Beck (Shiver)
Honorable Mention (because it was a re-read)
-Percy Jackson (The Lightening Thief)
Top 5 Can’t Wait Reads of 2012
(the summeries are from GoodReads)

1. Scarlet by A.C. Gaughen
Posing as one of Robin Hood’s thieves to avoid the wrath of the evil Thief Taker Lord Gisbourne, Scarlet has kept her identity secret from all of Nottinghamshire. Only the Hood and his band know the truth: the agile thief posing as a whip of a boy is actually a fearless young woman with a secret past. Helping the people of Nottingham outwit the corrupt Sheriff of Nottingham could cost Scarlet her life as Gisbourne closes in. It’s only her fierce loyalty to Robin—whose quick smiles and sharp temper have the rare power to unsettle her—that keeps Scarlet going and makes this fight worth dying for.
2. Rebel Heart (Dust Lands #2) by Moira Young
The Tonton have been defeated. Lugh has been rescued. The heartstone bought Jack and Sabba together.
Now, Sabba and her family head west to meet him and start a new life. All should be well. But the shadows of the dead are stalking Sabba. And another kind of shadow is creeping across the dustlands. Then a messenger shows up. With news of Jack.

3. Cinder by Marissa Meyer
Humans and androids crowd the raucous streets of New Beijing. A deadly plague ravages the population. From space, a ruthless lunar people watch, waiting to make their move. No one knows that Earth’s fate hinges on one girl. . . .

Cinder, a gifted mechanic, is a cyborg. She’s a second-class citizen with a mysterious past, reviled by her stepmother and blamed for her stepsister’s illness. But when her life becomes intertwined with the handsome Prince Kai’s, she suddenly finds herself at the center of an intergalactic struggle, and a forbidden attraction. Caught between duty and freedom, loyalty and betrayal, she must uncover secrets about her past in order to protect her world’s future.

In this thrilling debut young adult novel, the first of a quartet, Marissa Meyer introduces readers to an unforgettable heroine and a masterfully crafted new world that’s enthralling.
4. Promised (Birthmarked #3) by Caragh M. O’Brien
The third book, due out in Fall 2012, is in process.

5. Earth Girl by Janet Edwards
2788. Only the handicapped live on Earth. While everyone else portals between worlds, 18-year-old Jarra is among the one in a thousand people born with an immune system that cannot survive on other planets. Sent to Earth at birth to save her life, she has been abandoned by her parents. She can’t travel to other worlds, but she can watch their vids, and she knows all the jokes they make. She’s an ‘ape’, a ‘throwback’, but this is one ape girl who won’t give in.

Jarra invents a fake background for herself – as a normal child of Military parents – and joins a class of norms that is on Earth to excavate the ruins of the old cities. When an ancient skyscraper collapses, burying another research team, Jarra’s role in their rescue puts her in the spotlight. No hiding at back of class now. To make life more complicated, she finds herself falling in love with one of her classmates – a norm from another planet. Somehow, she has to keep the deception going.

A freak solar storm strikes the atmosphere, and the class is ordered to portal off-world for safety – no problem for a real child of military parents, but fatal for Jarra. The storm is so bad that the crews of the orbiting solar arrays have to escape to planet below: the first landing from space in 600 years. And one is on collision course with their shelter.

So there's my year in review! Hope you all have a happy and safe New Years!
~Krazy Elf~
Posted by SarahO. at 9:30 AM

Email ThisBlogThis!Share to TwitterShare to FacebookShare to Pinterest
Labels: year-in-review